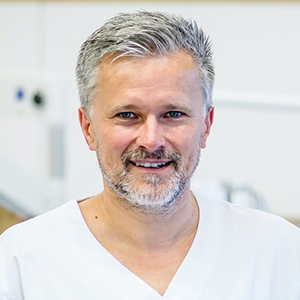 Dr Michał Nawrocki – owner of NAWROCKI CLINIC, one of the most modern Dental Clinics in the Pomerania region. In 1998 he graduated from the Dentistry Department of the Medical Academy of Gdańsk. From 1999 he worked as an assistant at the Department of Dental Prosthetics. There he gained recognition as a diligent and well-respected doctor and was the author of articles on the use of porcelain veneers in dental treatment published in Protetyka Stomatologiczna (Dental Prosthetics) magazine.

Already in 2001 he opened his own dental practice lekarzstomatolog.com, which in 2015 together with his wife Agnieszka Dojlidko-Nawrocka transformed into the Nawrocki Clinic. From the very beginning, Dr. Michał Nawrocki has been introducing the latest technologies and the highest standards of treatment in his dental practice. Since 2013, he has been using the Sirona CAD/CAM system – CEREC, and in 2016 the Fotona LightWalker Laser, which since its introduction has been used at the Nawrocki Clinic on a daily basis.

In 2018, as the first person from Poland, he completed post-graduate studies at RWTH University of Achen, defending his Master Thesis entitled: Comparison of two methods of peri-implantitis treatment with the use of Nd:YAG and Er:YAG laser and graduated with a degree Master of Science in Lasers in Dentistry.

In 2009 he received a Certificate of Implantology from the prestigious Goethe University in Frankfurt, Germany. In 2015 and 2016 he attended MPI Implant Prosthodontic Program at the Mediterranean Prosthodontic Institute in Spain and the University of North Carolina in Chapel Hill, USA.

He specializes in implant prosthetic treatment, laser use in dentistry, and in advanced techniques of digital procedure in dental treatment – Digital Smile Design, CAD CAM technology as well as computer navigation in implantation treatment planning – Simplant.

His extensive knowledge and many years of experience have made him a renowned expert, invited to host workshops, training courses and lectures at the largest and most prestigious events in the dental industry in Poland and abroad, such as Dentsply Sirona Congress in Warsaw in 2017 and 2018, International Ankylos Congress in Berlin, Vienna, the Dentsply Sirona Worlds Summit in Nice or the 7th Symposium: Lasers in Medicine and Surgery in Kranjska Gora in Ljubljana and Portoroz, and in October 2018 in Aachen during the WFLD / ISLD Congress. He is an Active Member of the Polish Academy of Aesthetic Dentistry, the Polish Society for Laser Dentistry, and the International Society for Laser Dentistry.